The most storied parts of Todd’s history involve trains and timber in the 1920s.

We’ll get to that. Let’s start from the beginning a long, long time ago.

The earliest documented human activity in the Todd area was at soapstone quarry located about ½ mile northwest of the Todd Post Office’s current location. Archealogists have dated the quarry back about 6,000 years and believe that native peoples used the soapstone deposit – a large outcropping of rocks on a mountainside – to fashion bowls and vessels.

A dig site not far from this quarry has also documented a structure that was likely a summer house. The High Country of North Carolina – owing to its harsh winters – is believed to have been only briefly inhabited by permanent residents sometime around 1200 A.D. during a particularly warm period in the Earth’s climate. Despite local folklore, there’s no evidence to support any theories of Cherokee here – instead those who hunted and passed through this area were likely Siouxan speaking peoples.

When German Bishop Spangenburg made an expedition through the High Country of North Carolina in 1751, he encountered no Indians.

Wolf’s Den on NC 194 in Watauga County where Col. Benjamin Cleveland was rescued in 1781. Col. Riddle was captured and taken to Wilkesboro where he was hanged. This photo, from John Preston Arthur’s book, History of Watauga County (1914), shows the old Tugman house which was demolished only in the last 25 years. 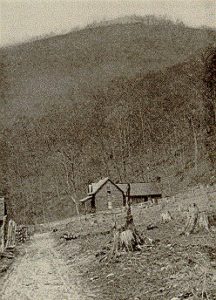 The first mention of the Todd area in recorded history comes in April 1781. A Revolutionary War colonel named Benjamin Cleveland had been ambushed at Old Fields, a settlement located about 14 miles downstream of Todd in Ashe County. Cleveland’s captors took him up the South Fork of the New River, followed Elk Creek to what’s known today as Pine Orchard Creek and then to Riddle’s Knob to a place called Wolf’s Den. Wolf’s Den is located on NC 194 between Boone and Todd. A group of colonists banded together and rescued Cleveland at Wolf’s Den several days later. This is the only skirmish of the Revolution to have occurred in present-day Watauga County.

The next record we have of activity comes from the Tatum family. James Tatum built a cabin, possibly as early as 1780, overlooking the New River. The cabin was located at what’s today called the Old Tatum place, about 2 miles up Big Hill Road from downtown Todd. Descendants of the Tatum family still live in the area and in the 1950s they donated the Cabin to the Southern Historical Society which moved the structure to Boone. You can visit the cabin at the Daniel Boone Gardens on the grounds of Horn in the West. 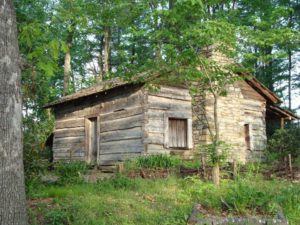 The Tatum Cabin, built about 1785, was donated to the Southern Appalachian Historical Society in 1958.

Between 1780 and 1833, we know that the area was settled to some degree – at least enough for the establishment of a church in 1833. The first building known as South Fork Baptist Church was also built overlooking the river on what today is Big Hill Road – about ¼ mile from Todd Railroad Grade Road. The building had two doors – one for men and one for women since it was not proper for men and women to sit together in those days.
The community may have been called Elk X Roads (Elk Crossroads) because it was literally a crossroads. Old maps from the 19th century show a road from Council’s Store (Boone) to Jefferson and a road from Wilkes to Taylorsville (now Mountain City, Tenn.) crossed here.
In 1837, the first post office was established at Todd. The name at that time was Elk X Roads. We know that Thomas Greer was the first postmaster, but we are unsure of the exact location.
The area for the most part, leading up to the Civil War, was split into large farms. Farming families married into each other, thus consolidating the land holdings. Brown, McGuire, Cooper, Bledsoe, Graham, Ray, Dobbin, Tatum and Howell were some of the most prominent names. Hugh Dobbin and James Todd both operated stores in Todd before the Civil War.

During the latter half of the 19th century, the community’s commerce grew with large scale timber harvesting and also mining of mica and copper.

In 1894, the Post Office was formally renamed Todd in honor of Joseph Warren Todd, a native son, who was a Civil War veteran and credited with restoring order and thwarting bushwackers in Watauga and Ashe counties immediately after the Civil War. His brother, James, was shot in the back and killed by bushwackers near Todd. Col. Todd practiced law in nearby Jefferson following the war until his death in 1909. He also served several terms in the North Carolina General Assembly.

Todd’s heyday came in the early 20th century with the timber boom. In 1910, the Carolina-Virginia Railway announced the company would extend tracks from West Jefferson to Elk X Roads. The train was known as the “Virginia Creeper” because of its slow but steady ascent of the steep grades.

At the peak of the boom, Todd boasted two doctors, a dentist, one bank, seven stores, three mills and two hotels. The community was incorporated in 1915 and had a mayor, council and a town marshal. Frank Ray and Walter Cook, co-founder and operator of the general store for more than 40 years, were the only two known mayors. 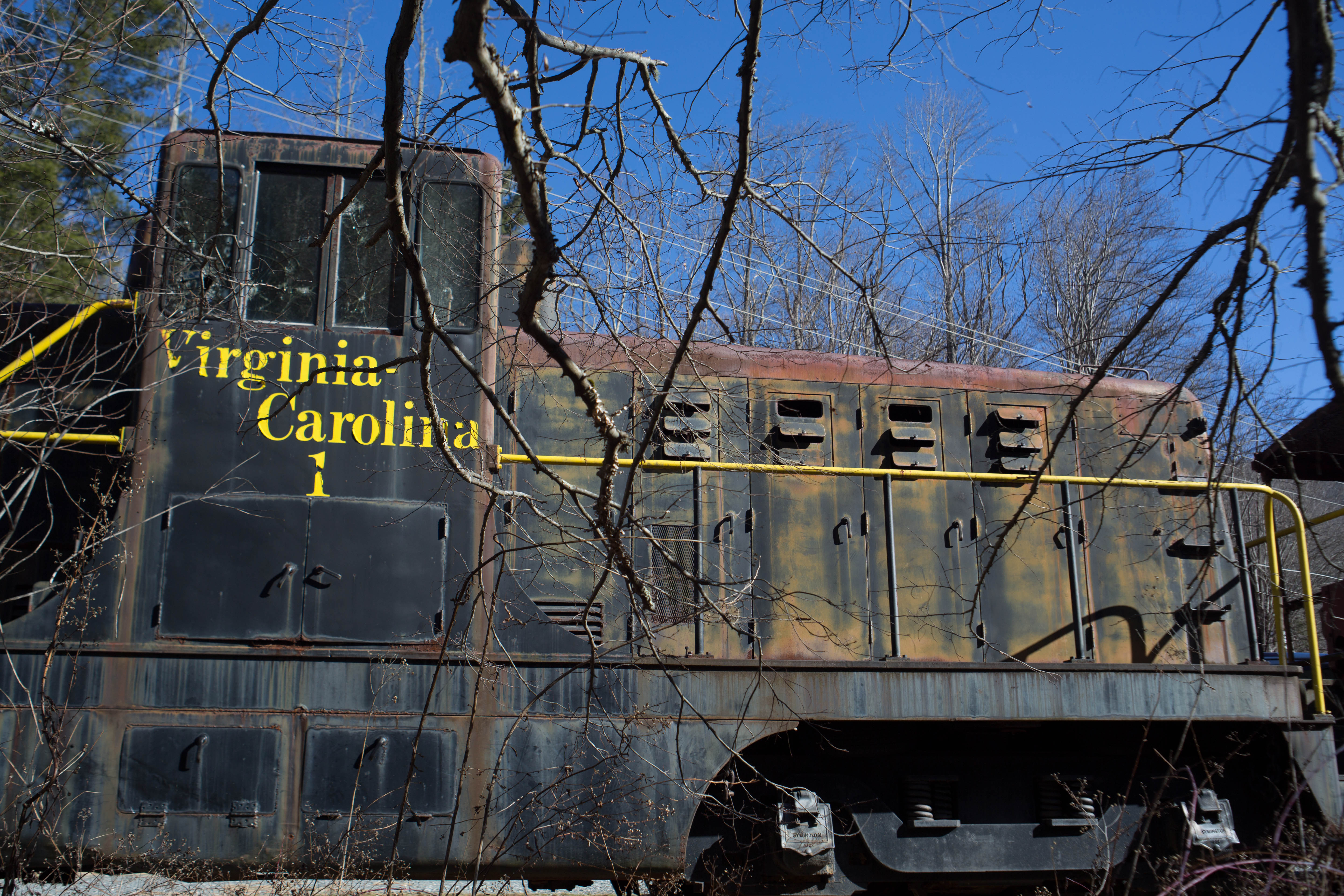 The Virginia-Carolina railroad came to Todd because of the vast tracts of standing timber in the area. By 1934, most of the mountains in the valley were stripped of hardwood trees and the railroad company was losing money running the extra 14 miles of track to Todd. It was the midst of the Great Depression and the train pulled up its tracks, the Bank of Todd was liquidated and the town’s commerce all but vanished in a few short years. In 1940, a devastating flood washed away buildings and much of the evidence of what had gone on here before.