Join us in Downtown Todd on August 20th for our final concert of the 2016 Summer Concert Series. The Tillers are a town favorite, and especially for Helen Barnes-Rielly (Todd Mercantile). Thank you Helen for featuring the Tillers on Slice of Todd Life.

Take it away, Helen!

On Saturday, August 20th at 6pm, one of my personal favorite bands will be coming back to Todd – The Tillers! I met Mike Oberst and Sean Geil in 2007, just a couple months after they formed their new band with then bass player Jason Soudrette. At the time I was booking appearances on the top rated morning show in Cincinnati. Mike had called me up to see if they could come and tape a performance for our morning show to promote their upcoming gig at Goettafest. I had been looking for a way to promote the event that didn’t involve cooking. (Goetta is a very popular sausage meat that you can only find in Cincinnati.)

It was perfect for our show! At the time we had a very cranky audio guy who hated to stay late and record bands. He never had much good to say about any band we had but after recording The Tillers, he rushed up to me and said that this band was amazing and that anytime I wanted to book them back would be okay with him!

Fast forward a couple years, Jason left to pursue auto racing and raise a family and Aaron Geil (Sean’s brother) joined the band. In the summer of 2009, Mike and I were talking and I told him I was going to Todd, NC to a Doc Watson concert. He had never heard of Todd (crazy I know :).  He asked if I knew who booked the bands and that they would LOVE to play in the town that Doc played in every year! The next year they opened for Doc. They were absolutely giddy! The day of the concert they learned a Doc song to play for him – literally learned it an hour before going on stage.

That first year Todd fell in love with the Tillers and they fell in love with Todd!  They opened for Doc the next year too in 2011. Little did any of us know that would be Doc’s final performance here in Todd. On their CD ‘Hand on the Plow’ released in 2013 they have a song they wrote that mentions playing with Doc Watson as the rain comes down called ‘The Road Neverending’. They also talk about it on their ‘Live Farewell to the Southgate House’ CD.

Magnetic showmen, mature musicians and colorful storytellers, the Tillers have received acclaim across the nation and abroad. In 2009, NBC News anchor Tom Brokaw featured the Tillers in a documentary about US Route 50.  Brokaw showcased the Tiller’s song “There is a Road” (Route 50) during the story. They have won over Cincinnati’s bar and festival scene. They were awarded CityBeat Magazine’s Cincinnati Entertainment Award for best Folk and Americana act in 2009, 2010, 2013 and 2014. Their relentless gigging has taken them throughout the East coast, the Midwest and West, the Appalachian south and to the UK and Ireland opening for the St.Louis crooner, Pokey LaFarge. They have shared the stage with national touring acts like Americana legends Jerry Douglas, Iris Dement and folk giants Doc Watson and Ramblin’ Jack Elliott.

This year before the band plays, we will be dedicating a bench to the man who helped bring the Tillers to Todd, my late husband, Jack Rielly.  The bench is located in the spot where Jack always stood in the audience to listen to bands. The TCPO bought it with donations made to them in honor of Jack. A memorial plaque will be added to the bench before the concert. (If you are interested in doing the same for a loved one, contact the TCPO.) Jack loved the Tillers.  When he went into hospice care in 2014 and couldn’t make it to their concert, they came to our house and played their concert for him. 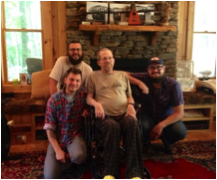 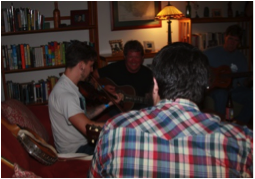 Since 2010, the Tillers have created a huge following here in Todd and the High Country, playing a mix of their original songs and songs plucked out of the Appalachian woods, churches, riverboats, railroads, prairies and coal mines – some older than their grandparents. This is a band you won’t want to miss!

Hope to see you there! 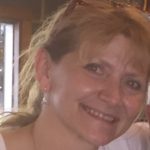 Helen Barnes-Rielly resides in Todd. She owns the Todd Mercantile and Bakery and is a realtor with Peak Mountain Properties.